So cold again today we didn’t venture out for long but did visit Padstow. 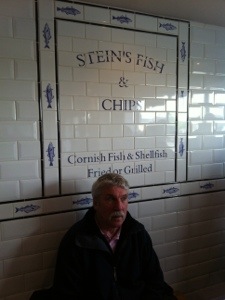 That was lunch sorted!

Apart from that, we watched a bit of daytime tv and drank lots of tea! I hope tomorrow is a wee but warmer – there was snow in the air today. Brrrr..

Have a wicked Wednesday!

It’s hard to believe we were in the sea on Sunday – today it has snowed! The wind has been extreme in both strength and coldness!

We stayed around the cottage all morning save a quick forage to the Spar shop for supplies – a French stick to have with cheese for lunch and some bacon and eggs to do a fry up for dinner tonight.

Despite the cold it looked nice out of the window!

After lunch we headed off to the bright lights of Truro. 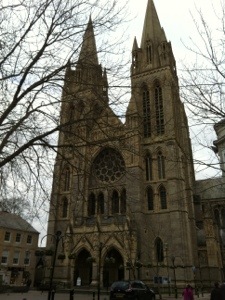 We spent lots of time inside shops hiding from the cold, and even managed a Nero’s coffee and some black current and apple cake. Nice!

Home and daytime TV was our best option – it is not a day to spend time out and about. Not sure what tomorrow will bring – I just hope it’s a tad warmer!

Have a tremendous Tuesday!

Finally we got to see the sun today! 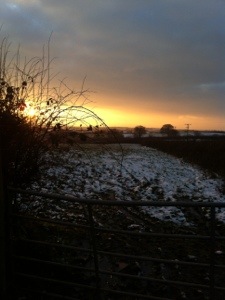 It was late afternoon by the time the clouds parted and we saw this lovely sunshine – enough to brighten any day.

So nice to get out of the house, all wrapped up and out for our walk.

Tomorrow is the day I get to see the consultant – at least we may know a bit more. Fingers crossed.

Have a terrific Tuesday!

I seem to have been busy all day, but I have actually done nothing!

We got up late, had soup for lunch and then ventured out – flipping cold! Everything is still frozen and there are some lovely icicles hanging from the thatched roofs in the village. 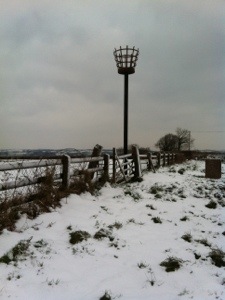 Grey again too, it would be really really nice to see some sun. Oh well!

Working at home tomorrow, so thankfully I don’t have to negotiate slippery roads. What ever you are doing – stay safe & warm!

Have a marvellous Monday!

Although it hasn’t snowed today, yesterday’s hasn’t gone anywhere either!

We ventured out late morning and it was a barmy minus 1.5 outside! We scraped the car and gingerly made our way into town. We had a smooch around the shops and the inevitable coffee at Nero’s before heading off to the supermarket.

Stocked up again, we bought some lovely fresh salmon steaks which I oven baked for dinner. Yummy!

I’m hoping for a little bit above freezing tomorrow so we can get out for a walk.

Have a super Sunday! 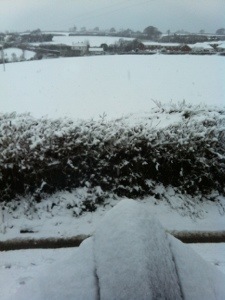 This was the beautiful view from the office this morning. I love snow! Poor Derek though!

Bless! We got out for a walk over lunch but the sun never came out, it’s been snowing most of the day.

Cracking view! Exmoor is out there somewhere!

Personally it has been a better day, I have just about convinced myself that all will be well, but still get in a panic at times. I hope it gets easier.

Lovely weekend to look forward to now – I hope you have a super Saturday!

This morning it snowed! Just a little bit and nothing stayed on the ground, but it was very pretty whilst it lasted. They are forecasting bucket loads for us tomorrow though! 🙂

With that in mind, we popped into the supermarket at lunch to pick up some meat, veg, bread and milk. That will see us through the weekend and through the bad weather that is forecasted.

In other news I got my next consultant appointment through – Tuesday afternoon. One step closer to knowing what’s going on. Neither hubby nor I slept too well last night, obviously a stressful time for both of us, but we have agreed to carry on as normal and just let them get on with it!

Tonight we are at the Community Centre for badminton – at least that will keep our minds off what might be.

Working at home tomorrow, and hopefully watching it snow!

Have a fab Friday!

Not *that* kind of Shopping!

The beautiful plan I had for today went to rats as soon as we woke up to snow! Lots of snow. The forecast said there may be a little, and then turn to rain, but that did not look likely, so instead of a lazy morning and out after lunch, we headed straight out this morning to get the shopping.

When I say shopping – I don’t mean shopping – I mean shopping! We started at Wickes and bought treated wood to fix a walkway in the garden, a brass thingy and a plastic ball to fix the toilet that won’t stop filling, a few brass ring things and 3m of plastic pipe to fix the overflow. Then on to Homebase (I like Homebase – it has “housey” things!) where we bought paint brushes, glue, some plastic protective sheets (for when I slap paint around) and some new overalls (to slap around paint in!). Then off to a warehouse shop to buy some ceramic dishes for hubbies oil painting – they sell egg holders that make fantastic mixing pallets!

Finally we went to Sainsbury’s for the food shop, but not before a quick pit stop in their cafe for a coffee and a shared egg sandwich.

Home mid afternoon and we managed to get out the old overflow pipe and put in the shiny new one – but not without having to move the washing machine and one of the freezers out, thereby exposing several years of cobwebs and grime – I cleaned it all before they went back!

By mid afternoon the snow turned to rain – but it is still cold and the snow is still on the ground – so no venturing outside today. I’m hoping the rain may stop by tomorrow and we can get out for some fresh air of the walking/running variety.

Have a wonderful Sunday folks.

Got up bright and early for work this morning and happily it was not freezing, but there was still a good thick blanket of snow on the roads, and all over my car! I had to scrape it all off before I set out for work. The roads were white until I got down onto the main road, and then all was fine. It was still snowing when I drove home tonight, and unfortunately they are forecasting freezing temperatures over night. That could make tomorrow’s journey interesting!

So – work – can’t say more than that really. I managed to get out over lunch and walked up to the local shops in the rain and cold – but it was good to get out and get some exercise. Lunch was salad with cheddar cheese, followed by Greek yogurt and a spoon of lemon curd. I managed to avoid all traces of chocolate until I got home!

Home, and cold beef left over from last night with salad and a couple of new potatoes. Then I ate a large bag of giant chocolate buttons – pah! Didn’t need them, just wanted them. Sorry.

Tomorrow, I am hoping to do better – providing I can get out, I will be back at the office.

Have a lovely Tuesday!

I thought it was quite funny posting some pictures of me running in the snow earlier in the week – talk of “speaking too soon”! Today we have seen the first snow of winter.

I drove into the office this morning after a night of gales, hail and battering rain. It made for an interesting journey dodging puddles and branches in the road. It was pitch black when I set out, so I took it easy – only to have Mr Impatient right on my bumper around the lanes and the bends. Why do people drive like that? I had to swerve on occasions to miss tree bits – he (had to be a man didn’t it!) could not possibly react quickly enough to stop if I had to. What would have happened if I had gone around a corner and found a tree in the middle of the road? I could have stopped – could they? Probably not. Driving madness. Don’t do it!

In work nice and early and got lots done before a meeting with one of our key suppliers – nice people – great meeting. Before that I ate a banana with some peanut butter which kept me full until lunch – great food!

I only had telephone conferences booked for the afternoon, so I took the opportunity to drive home over lunch and pick up from home. Lovely to be safe and sound in the light – but on the way home I drove through sleet and snow, and that continued when I got home – even some “real” snow later – big flakey bits. Lovely to watch from the warmth of my office with the central heating on! I ate lunch late when I got home – two greek yogurts with some lemon curd stirred in. My new favourite.

I managed to phone the hospital too as I am still waiting for an ultrasound appointment – as soon as that is done I can get back on the waiting list for my operation, so I’m keen! A very nice lady in ultrasound apologised and told me I would get an appointment for the first week in January – which suits me nicely. Doing the sums again, that means with a six week wait for my operation, that could be done by the end of February – great! Plenty of time to get healed and run the BUPA 10k in London at the end of May!

Dinner has been some honey roast salmon and salad. Happy to say I was not starving, so that filled me nicely. Now – decaf coffee with amaretto! Just lovely.

Tomorrow – my annual appraisal. That should be fun!

Have a wonderful Wednesday.